Sports and politics are inseparable and cricket is not an exception to this theory. From Mahatma Gandhi’s abrasion towards the Pentangular tournament to the D’Oliveira affair, political events have often taken centre stage at the expense of actual cricket.
If any political conundrum has had its longest impact on the sport, it is the Indian partition in 1947, marring the India-Pakistan relations for eternity.
At first, the players that played for a unified India had to decide which country they would want to represent. Second, none of the teams wanted to lose to each other which led to mundane cricket. All the 10 Tests between the arch-rivals from 1955 to 1961 ended in a draw.
Cricket and politics have been so chaotically intertwined, that one can sense a conflict only by looking at the amount of cricket played between the two countries in a specific timeline. Remember, the two teams had already contested in a war (in 1947/48) before contesting in a Test match (1952).
When the two governments are striving for an amicable relationship, India-Pakistan bilaterals become an annual event. In times of distress, it comes to a standstill. They faced off in 41 ODIs across five years – 1996 to 2000. A lull in the aftermath of the Kargil war allowed a sole fixture in the next three years – the 2003 World Cup. Another peace movement followed and they toured across the border annually and alternatively, featuring in 31 ODIs from 2004 to 2008.
To establish the contrast, India are now assigned only 42 ODIs in total in the 2023-27 FTP cycle. 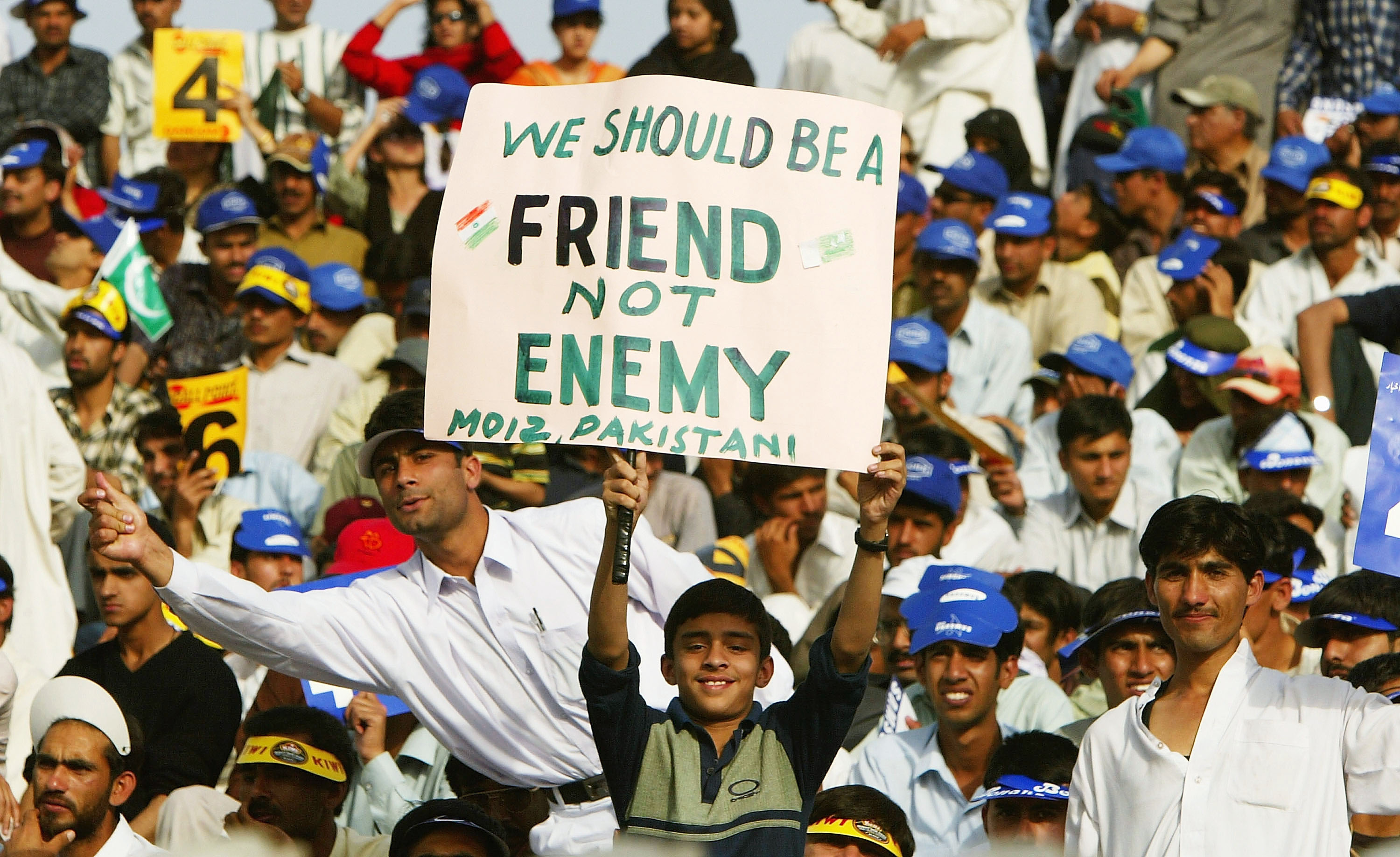 In short, all the years of inactivity between India and Pakistan – 1962-1978, 2001-2003 and 2008 onwards barring a rare bilateral series in 2011/12 – can be explained by some sort of political turmoil.
The shared history was enough to instill a cutting edge in the rivalry. But as it happens with every other priceless asset in life, limited availability inspires a surge in stocks.
"I sometimes feel that India-Pakistan rivalry has become an industry in itself,” former India cricketer Gautam Gambhir wrote in his column for the Times of India prior to the 2021 T20 World Cup final.
With only one bilateral series being played between India and Pakistan since 2007, the neighboring nations now only contest in multi-team tournaments – the World Cups and the Asia Cup. Both ICC and ACC – the governing bodies for these tournaments – have ensured that the two sides lock horns in every edition. Post the 2011 World Cup, India and Pakistan have been consciously placed in the same group, with a prime time slot on the weekend to gain maximum eyeballs. In fact, these games are placed in the early phase of the competition to set the ball rolling.
Such is the infatuation, even the non-cricket turn into a keen audience. It has now seeped into the fans across the world, beyond people of Indian and Pakistani descent. In short, India and Pakistan form the most hyped rivalry in world cricket at present.
*****
And so is the pressure.
Many cricketers have shed light on it. "Cricket is a pressure game, and when it comes to an India-Pakistan match the pressure is doubled,” said former Pakistan captain and Prime Minister Imran Khan. The 1996 World Cup squad of Pakistan would know it the best. The quarter-final defeat to India initiated such a furor at the Lahore airport, that the team's return flight had to be redirected to Karachi. 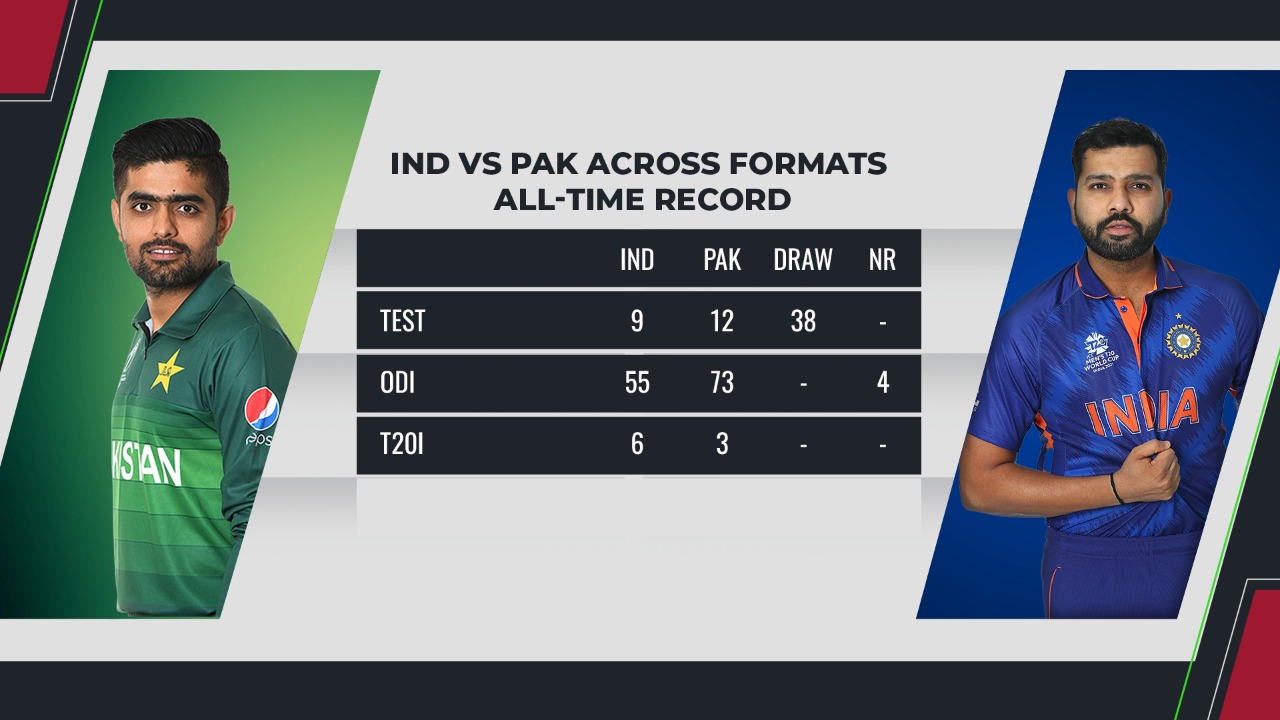 Overall, Pakistan lead the head-to-head record. In T20Is, however, India hold the upper hand, winning six out of nine encounters, along with a famous tied game that was also adjudged in favour of the Men in Blue after a bowl out.
The break in the pattern with the T20Is marks a major attribute of this rivalry. The format emerged in the 2000s, the decade when India began catching up with Pakistan.
Pakistan were the dominant side in the pre-2000 era. From the 1970s until the turn of the millennium, Pakistan won 47 of their 78 ODIs against India. The prime reason was the contrast in the bowling attack and the venues that made it more significant.
58 out of the 78 Indo-Pak ODIs in this phase were played on the placid tracks of Asia. With both sides consisting of excellent batters of spin bowling, it was the pace arsenal that was supposed to make a difference. Pakistan were miles ahead in that regard.
The likes of Imran Khan, Wasim Akram, Waqar Younis, Shoaib Akhtar and others could generate the extra yard of pace and reverse the ball. From the advent of ODIs in 1971 to 2000, Pakistan had the third-best pace bowling attack in the world – averaging 28.2 runs per wicket. India were 3.6 runs per wicket behind at 31.6.
This was the striking difference in Sharjah, which hosted the most Indo-Pak ODIs in these three decades – 22. Pakistan won 17 of these fixtures.
*****
The bowling numbers didn’t change drastically in the 2000s but India had an influx of quality batters, building more support around Sachin Tendulkar. The 2000s eventually lived up to the hype of the India-Pakistan rivalry. India won three of the four bilaterals among the two nations from 2004 to 2007. 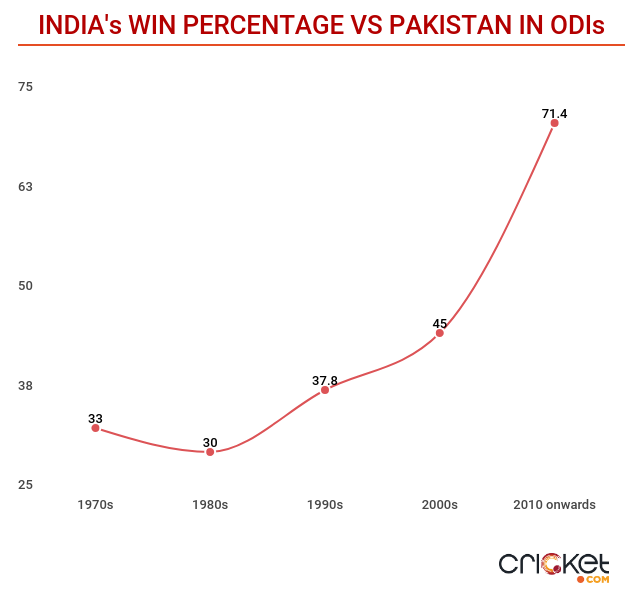 Meanwhile, India have maintained a superior record in the World Cup events. They won 12 matches on a bounce in the World Cup clashes from 1992 to 2019 (both ODIs and T20Is). The reasons behind this stat could be subjective. However, India holding their nerves better in key moments has been a common theme across these victories.
In the 2010s, India lost the only bilateral series but won all their six World Cup games. This is where India have ‘shifted the power’ – from Pakistan bossing the pre-2000s era to India nailing more notable wins in the 21st century. The fans are divided into two groups – one thrives on the head-to-head stats while the other relishes a supreme World Cup record.
Pakistan broke the World Cup jinx with a 10-wicket win over India in the T20 World Cup last year. However, when the two teams clash in the upcoming Asia Cup encounter, India will start favourites.
A majority of Pakistan’s victories over India since 2010 have been made possible by a relentless new ball spell from a left-arm pacer. It was Junaid Khan in 2012, Mohammad Amir in 2017 and Shaheen Afridi in 2021. That is the way to derail the current India side – dent them early. Therefore, Shaheen’s injury-forced absence is a big jolt to Pakistan’s chances.
*****
ICC has one tournament scheduled every year until 2031, assuring that India and Pakistan face-off at least once on annual basis. That, however, is still not enough to flourish this rivalry to its full potential.
The biggest consequence: India and Pakistan have not played Test cricket in the last 15 years. It has kept the sport bereft of some mouth-watering battles on the cricket field: Virat Kohli vs Babar Azam, Shaheen Afridi vs the Indian batters, Jasprit Bumrah and R Ashwin against Babar and Mohammad Rizwan. The current generation of India and Pakistan players have barely played against each other.
Amidst all the conflicts going around, most of the India and Pakistan cricketers have maintained friendly relations. In 1996, the two teams sent a combined XI for a one-off 40-over game against Sri Lanka before the World Cup, to promote that the island nation is safe for cricket following the unrest of guerrilla fighting. Watching the likes of Wasim Akram, Waqar Younis, Sachin Tendulkar and Anil Kumble as teammates shed light on a parallel universe where the partition has not happened. 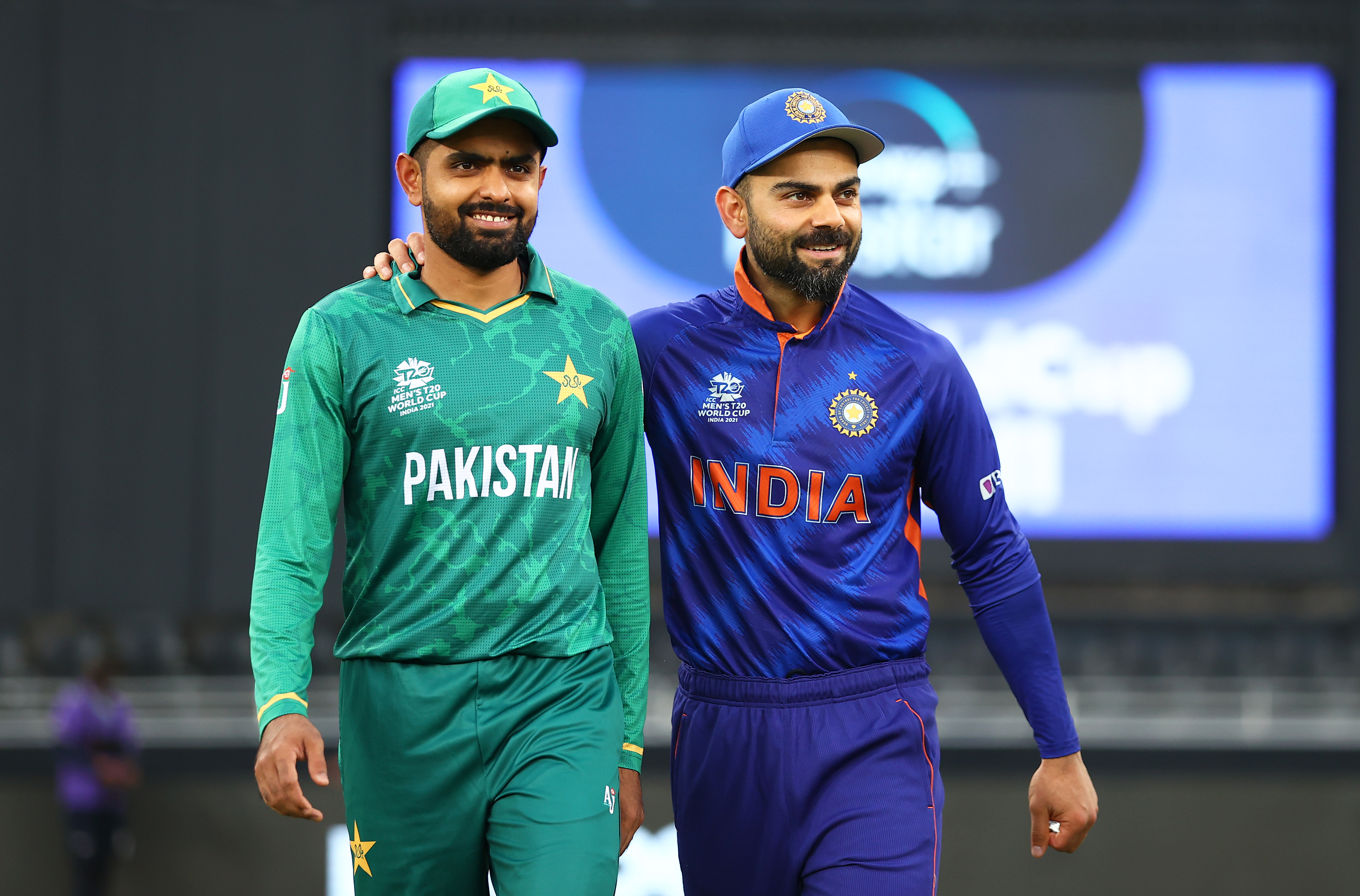 Kohli and Amir have always praised each other. The cordial pictures of the two skippers in the 2021 T20 World Cup – Babar and Kohli – warmed the hearts of many.
Not to forget the breakthrough tour in 2004. The objective of India’s first full-fledged tour to Pakistan in 15 years was to establish the foundation of peace. Such was the impact, the United Nations announced a special award to congratulate the two sides on promoting sports as a method to bring peace.
It was an accurate depiction of what sports can achieve if not obstructed by politics, but the other way around. We can only hope such days are back soon.