Erin Holland, husband finally go on honeymoon after staying mostly apart for two years due to Covid
US President Reagan's shooter John Hinckley fully released after 41 years
Home
Latest
Pakistan
Business
Sci-Tech
Phones
World
Opinion
Life & Style
Sports
Blogs
Archive
Other
IPRI report analysed 5,085 tweets that were directly related to Pakistan from June 1, 2021 to May 31, 2022
The discourse by US actors related to Pakistan had started shifting from a focus on Afghanistan and terrorism and more towards Pakistani domestic politics since October, two months after the US withdrawal from Afghanistan, a report revealed.
This was disclosed in a report by the Islamabad Policy Research Institute (IPRI) regarding the US-Pakistan relations post-Afghanistan withdrawal.
The report provided an in-depth analysis of key Twitter accounts of US-based think tanks, policy experts, and media sources to understand, analyse and deconstruct the shifting discourses on Pakistan over the last year.
Read more: Pakistan, US ties
"Our aim was to see which topics received the most attention in US-led discourses related to Pakistan and how these discourses have evolved over the past year," it stated.
"In order to analyse US discourses on Pakistan, we looked at the Twitter data of three prominent US think tanks, three major media sources, and six policy experts via the latest Twitter API."
The report further said that out of the 195,264 tweets scraped, 5,085 tweets were filtered that were directly related to Pakistan from June 1, 2021 to May 31, 2022.
"We then further categorised these tweets related to Pakistan into critical issues affecting the Pakistan-US relationship, i.e., Afghanistan, terrorism, nuclear (issues), China, India, civil-military relations, and politics," it added.
The researchers witnessed a surge in activity in August 2021 owing to the US withdrawal from Afghanistan. "In October 2021, the main focus of US accounts was on the TLP's protests that continued for a month. The last few months of 2021 saw a reduced focus on Pakistan by US accounts due to the Russia-Ukraine conflict," they said.
The report stated that April 2022 saw another surge in the frequency of tweets by all actors as the political unrest heightened due to former prime minister Imran Khan's ousting via a no-confidence vote. 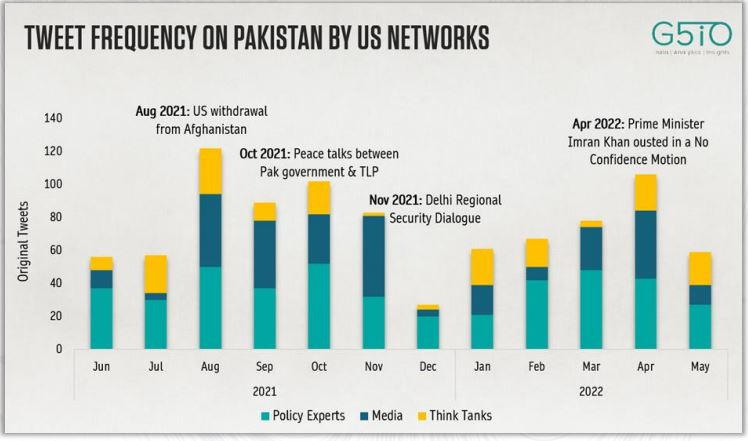 It said that as the US withdrew from Afghanistan, the discourse on Pakistan shifted from being Afghan-centric towards Pakistan’s domestic politics. Moreover, there was a surge in nuclear-related discourse in October 2021, which coincided with Dr AQ Khan's death anniversary.
Also read: New US envoy seeks to deepen ties with Pakistan
The US accounts also covered Pakistan government talks with the TTP in May 2022. China was also mentioned with respect to the China-Pakistan Economic Corridor's (CPEC) security and Russia regarding warming ties with Pakistan. 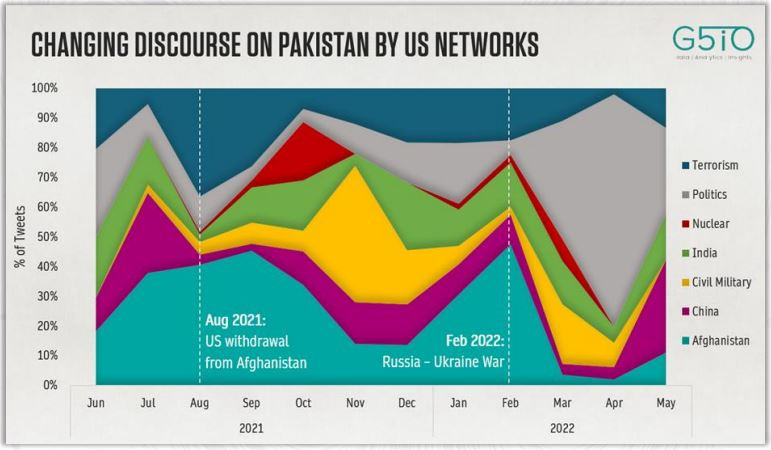 The report also stated that policy experts were the most vocal on selected key issues, focusing on Afghanistan, Pakistani politics, terrorism, and China. They also spoke the most about the civil-military relations in Pakistan while commenting on Pakistan and India's ongoing tensions.
"Major media outlets focused equally on Pakistani politics and terrorism-related discourse, with a relatively lesser focus on Afghanistan concerning Pakistan, while having the highest contribution to the nuclear-related discourse. The think tanks mainly focused on Afghanistan and China, along with politics." 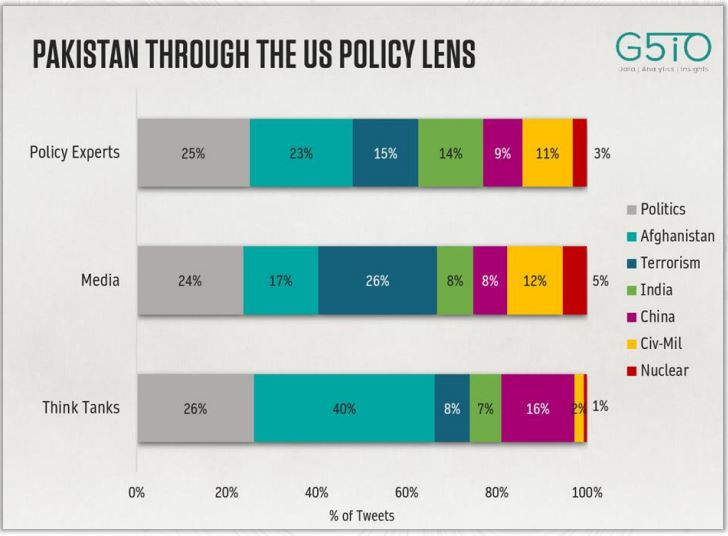 After the US, the report stated that Afghanistan was the top mentioned country by the US accounts regarding Pakistan-related discourses, owing to Pakistan's critical role in the US-Afghan crisis and US withdrawal.
India was mentioned regarding nuclear discord between the two countries and increasing tensions on the Line of Control (LoC). Russia and China were also mentioned, displaying the US concerns over Pakistan's friendly relations with Russia and China.
"Our analysis shows that US accounts predominantly focused on Pakistan through the lens of the Afghan war and the withdrawal of US forces," it added. 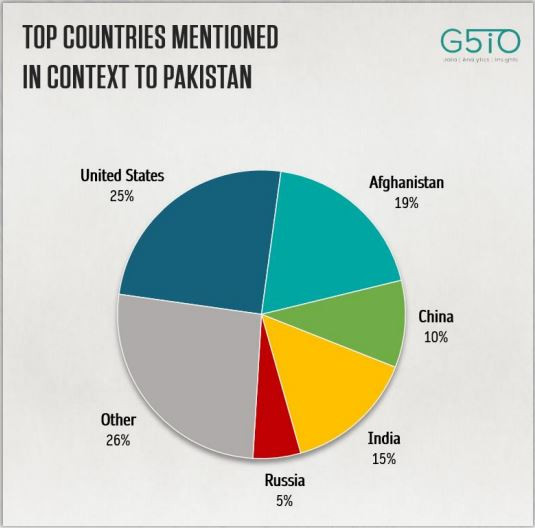 The report said that the word "Taliban" was repeatedly used in tweets related to Pakistan in the context of US withdrawal from Afghanistan and the group's subsequent takeover of Kabul.
On the other hand, words like "TLP," "TTP," "KHAN," and "PTI" show the increasing focus of the US accounts on Pakistan's domestic issues after US withdrawal from Afghanistan, it added.
China has also been mentioned mainly concerning CPEC and in the context of Washington's Indo-Pacific strategy. 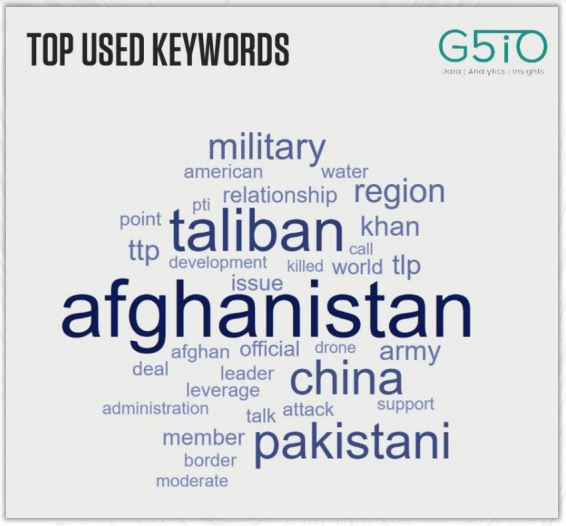 The report concluded that the discourse by the US actors related to Pakistan had started shifting from a focus on Afghanistan and terrorism, more towards Pakistani domestic politics since October, two months after the US withdrawal from Afghanistan.
It said that the frequency of political and civil-military discourses was highest during the period of uncertainty, following the ouster of Prime Minister Imran Khan in April 2022.
It further said that Pakistan-China-related discussions by the US have also increased in frequency since then, bringing to attention the US Indo-Pacific strategy following a brief lull earlier this year.

Replying to X
Saved ! Your comment will be displayed after the approval.
Error !
Error! Invalid Email.

Comments are moderated and generally will be posted if they are on-topic and not abusive.